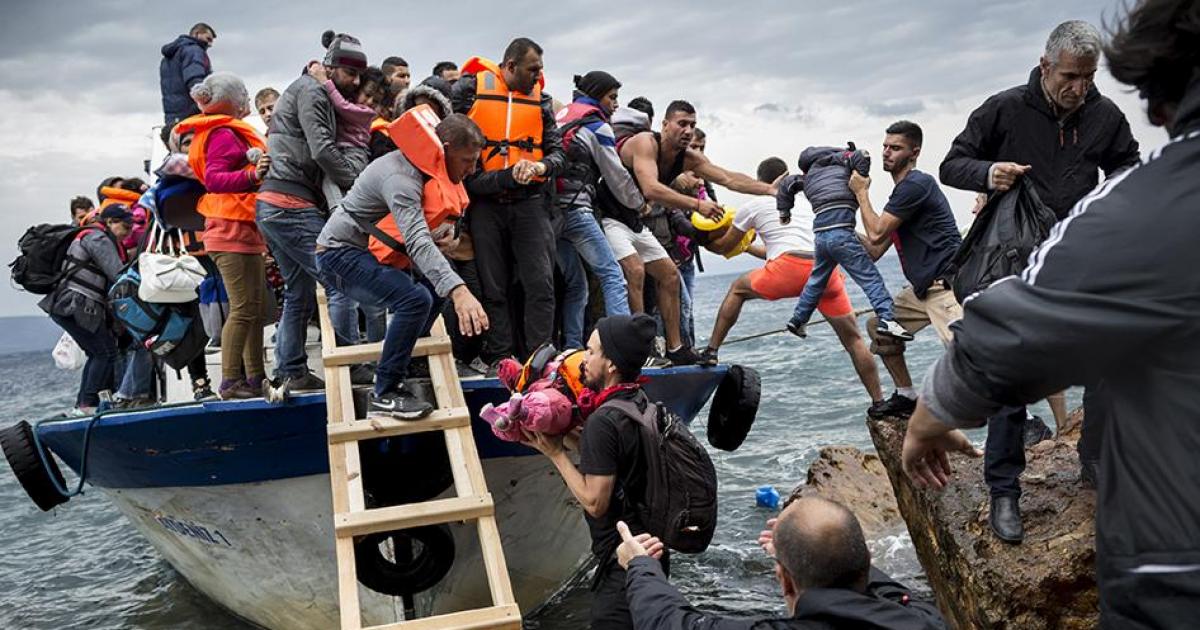 Assisting refugees is normally portrayed as the “right” thing to do, the “loving” thing to do. It is not usually portrayed as the “logical” or the “rational” thing to do. Let’s think about this from a purely selfish point of view. I will not bring “feelings” or “moral principles” into the discussion. What are the pros and cons of our options?  What are the advantages and disadvantages of our options if we look at them from a selfish point of view?

Let’s look at our options. Do we send them back home to a war zone? Do we give them handouts for years to come until the war has ended and they can go back home? Or do we try to integrate them into society?

Send refugees back to their country

What are the possible scenarios if we send them back to their country? They may live a miserable life and die, and that would be the end of the story. But they might not die, they might take up arms to protect themselves and even join forces with local militias to survive. That would not be a very good outcome for us, because that would perpetuate the war and lead to more refugees landing on our doorsteps.

Keep refugees in a confined area

Another option is to enclose them in a certain area once they have reached our country. That would entail giving them shelter and food and preventing them from moving beyond that specific location. A whole community of people living in an open-air prison that has no means of providing for itself does not seem very sustainable to me. I also fear to think of the social implications of breeding a community of prisoners that have not committed a crime.

More money on security to keep refugees out

I hear someone say, we should spend more on security and ensure they cannot reach us. It’s not our problem that they can’t sort out their own problems. That is a good point. Why should an innocent citizen acting quite peacefully in his or her own country have to deal with the problems of another people? Well we now live in a world that is more interconnected. A generation of people born into a war zone with nothing to lose may turn into tomorrow’s terrorists. And as we have so unfortunately witnessed, no country is safe. We cannot assign police officers to every street and corner. Even increasing surveillance to the controversial topic of ‘spying on people’ is not preventing terrorist attacks. The conclusion is the problem won’t go away with higher security.

Let other countries take care of the refugee problem

There is another widely held solution: lets pay other countries that are closer to the warring country to host the refugees, even if they have no resources, nor the infrastructure to do so. These neighbouring countries think the same way other countries do. They don’t see why they should have to deal with somebody else’s problems. And thus, see it as unjust to bear the burden alone. They don’t think money is enough to solve the problem; like other nations, they are fearful for the identity of their country, and all the social problems a huge influx of foreigners would create.

Let them all in!

There is a solution that is promoted as the “loving and right” thing to do. That is letting the refugees in and allowing them to work and move freely within the country. Now let’s think in a selfish way. Is this good or bad for the people living in the host country.

The obvious factor to be considered is the finite resources in any country: land, energy, water, housing, health care…etc.  The second factor to consider is the social implications. An online poll conducted for the BBC illustrated that differences between immigrants and people born in the country are seen as a particular cause of tension among many Western European countries, where the number of migrants is the highest[1]. With the exception of the cosmopolitan cities of the world, such as London, New York and Singapore, it is not difficult to see why this would be the case. Psychologically, people want to live in a place that is in line with their culture and values. People want to maintain their sense of identity. Creating a system to integrate the new comers can help with this. However, integration is not an easy task. Nor is it a cheap one. It takes money, time and effort. If a person does not speak the local language very well, or not at all, and they come from a culture that is quite different, it is not easy to fit in. If they are left to their own devices and not assisted at all in the integration process, it will be difficult for them to create a life for themselves. They will at best create a community of poverty, and at worst turn into a generation that feels alienated from its society and may turn against that very society.

Thus, there is a limit on the number of people a country can let in during a short period of time, not only due to the economic/financial difficulties, but also due to the social implications.

The global community is interconnected

It seems to me that all the options we are currently looking into and trying out will negatively affect us in some way, either in the short term or the long term. The world is one global community. We are all interconnected. Much more so than we were in the past. There is no going back. We need to deal with it, whether we like it or not. We need to acknowledge the butterfly effect: the ripple effect of a problem on the other side of the planet will have repercussions on us. Let alone a war going on in a nearby country.

We have not even touched upon lost opportunities. We lose when a country falls. We lose the services they could provide us, we lose the products we could trade them for. We lose the opportunity to visit their land and experience their culture. We lose an ally that could help us when we need help.

We need to start thinking that way. We need to realize we cannot ignore atrocities happening elsewhere. Even from a selfish point of view. It will affect us. When people are desperate they take desperate measures. They will cross seas and oceans on unsafe boats to escape. If they are unable to escape, they and their children can easily become fertile ground for terrorist recruitment.

We already know we are interconnected at the national level

Many countries already realise how interconnected we are as a society on a national level and create their institutions and policies accordingly. Let’s look at the National Health System (NHS) in the UK.  In this system it doesn’t matter whether you work or not, whether you have paid taxes or not, whether you were born here or whether you immigrated from another country. You have access to healthcare if you live in the country.

What is the philosophy behind the NHS system? Inherent in this system is the knowledge that if we don’t help sick members of society, we end up quite literally with a sick society.  Either in the form of contagion, or in the form of a declining number of people that can produce what we need as a society. When people are sick they can’t contribute to society. And if their numbers increase, that would lead to a society that cannot provide for its needs. One point of view might be, let them fend for themselves. It is their responsibility to save up for such cases, to purchase medical insurance. Why should I have to pay for someone else’s medical expenses? Why should I bear the burden because I am one of the winners that can pay for myself, because I am qualified to take up a good job that pays well? I have to work hard to make this money.

We seem to think that our society only extends so far as our national borders. In our modern interconnected world that is not true. Our national communities fit within a global community.

Instead of spending more and more on security and keeping refugees out, which is proving ineffective, let’s pour our resources into solving the problem from the root cause. We need to let our politicians know we want them to spend time and money on this. If negotiation efforts are not working, then that is a sign we need to change strategy.

It is insane to keep doing the same thing again and again and expect a different result (Quotation widely attributed to Einstein).

We need to think outside the box

If our talks and attempts to reconciliate the two or multiple sides of the conflict are not working, why are we not trying a new approach. Let’s get creative. Are our governments enlisting the psychologists, the artists, the life coaches, the spiritual leaders in these talks? Have we looked at how ancient civilizations solved conflict? Have we looked at how indigenous communities solve conflict? Are we trying to solve the root causes of the conflict related to resource distribution and foreign interference in local politics? Have we contemplated new negotiation methods?

I don’t know what the solution is. But I do know that we need to change strategies. That we have to open our minds to new ways of doing things.

A consciousness of fear and greed creates wars. If we are to interject we need to come from a different consciousness.

What might happen if we interjected from a consciousness of inter-connectedness? What if we saw this as an opportunity? An opportunity to build allies with the future leaders of that country.